This advanced legato lesson is an extract from Progressive Metal Guitar, which develops the core metal techniques, as well as all other topics such as riff-writing and unusual scales.

One of the biggest challenges with any legato technique is keeping unwanted string noise to a minimum so be strict with yourself when practicing. Pay attention to reducing unwanted noise, and also play with only a mildly overdriven sound. It’s very tempting to use more gain and distortion to help the intended notes sustain but this also increases the volume of unwanted noise too.

It’s become popular to dampen the strings at the nut with a hair band or other soft material, which makes your playing sound cleaner, but I would recommend always practicing without one to be as critical as possible, as you probably won’t have the mute onstage mid-song. This means you’re not using a crutch to mask weaknesses in your technique.

The second half of the lick changes position to avoid the repeated notes and the position shifts can become unwieldy as the speed increases. Train the index finger to change position while the pinkie is fretting, so that the hand moves up the fretboard in a more dynamic way.

This next single-string idea features slides to jump between positions. The jumps are quite wide here as we’re skipping up and down the neck. The quintuplets should arrange themselves quite easily so long as you concentrate on performing the shifts on the beats.

Our third lick demonstrate that small legato fragments can be put together to create long legato passages that span the fretboard.

Using a twelve-note fragment, we descend through the different positions of F# minor along the neck. Practice the position shifts slowly at first. Concentrate on moving your pinkie towards the new position while the first fragment is being completed. This may sound like a lot of multitasking but it will stop you having to jump abruptly between shapes. 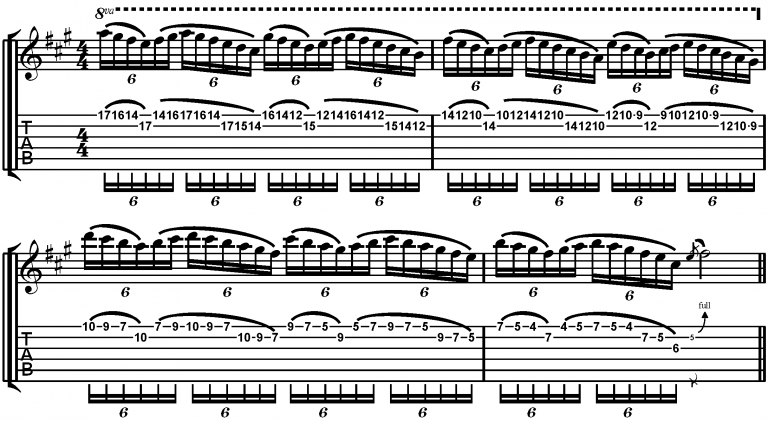 To get the most out of these three advanced legato licks, try transposing them to different keys or creating versions that work in different scales or modes. As always, start slowly and keep the timing of the notes as even as possible.

This advanced legato technique lesson is an extract from my new book Progressive Metal Guitar, which demonstrates advanced metal technique and helps develop creative ideas for your lead and rhythm playing.