Let’s look at the next part of Chet Atkins’ Mr Sandman. Here’s my video again to save you having to look back:

Now that you have the basic chord positions down, the next step is to master the thumb part. (If you’ve not looked at part one, it’s here!)

You might be frustrated at this point, wanting to dig in and play the whole thing, but I can assure you, the most important part of this style is solid thumb picking skills.

The melody to this particular song is unique to this one setting, but the skills required to play the bass part are the same on every song you’ll play in the style. It’s so important that you have the basic thumb patterns completely automate in your hand so you’re able to free up your brain’s “ram” to focus on the melody.

There’s a lot to this technique, and players from different eras have slightly different approaches to achieve different sounds (This is covered in a lot more detail in the book!). In short, while the technique is similar between Merle Travis and Chet Atkins, there’s enough subtle difference that you can play the same song and (depending on how you deal with the thumb) make it sound like one or the other.

When playing a chord with the root on the A string, the thumb alternates between the 5th, 4th, 6th, and 4th strings.

Take a look at the following example, I’ve written the chord in the first bar, then the repeating bass pattern. When playing this, keep the full chord held down, and apply a palm muting to imitate the sound of an upright bass. Use the thumb pick, and use only down strokes.

Next is a C#9 chord, so the thumb acts the same as the first exercise, but with the left hand holding down a new chord form.

Now moving down to an F#7, this chord doesn’t actually have a note on the A string, so instead you’re forced to play 6th, 4th, 6th, 4th, etc.

Here’s the complete first part of the song, playing just those bass notes with down strokes in the thumb. The chords are written above, but if you’ve forgotten any, check the previous lesson. 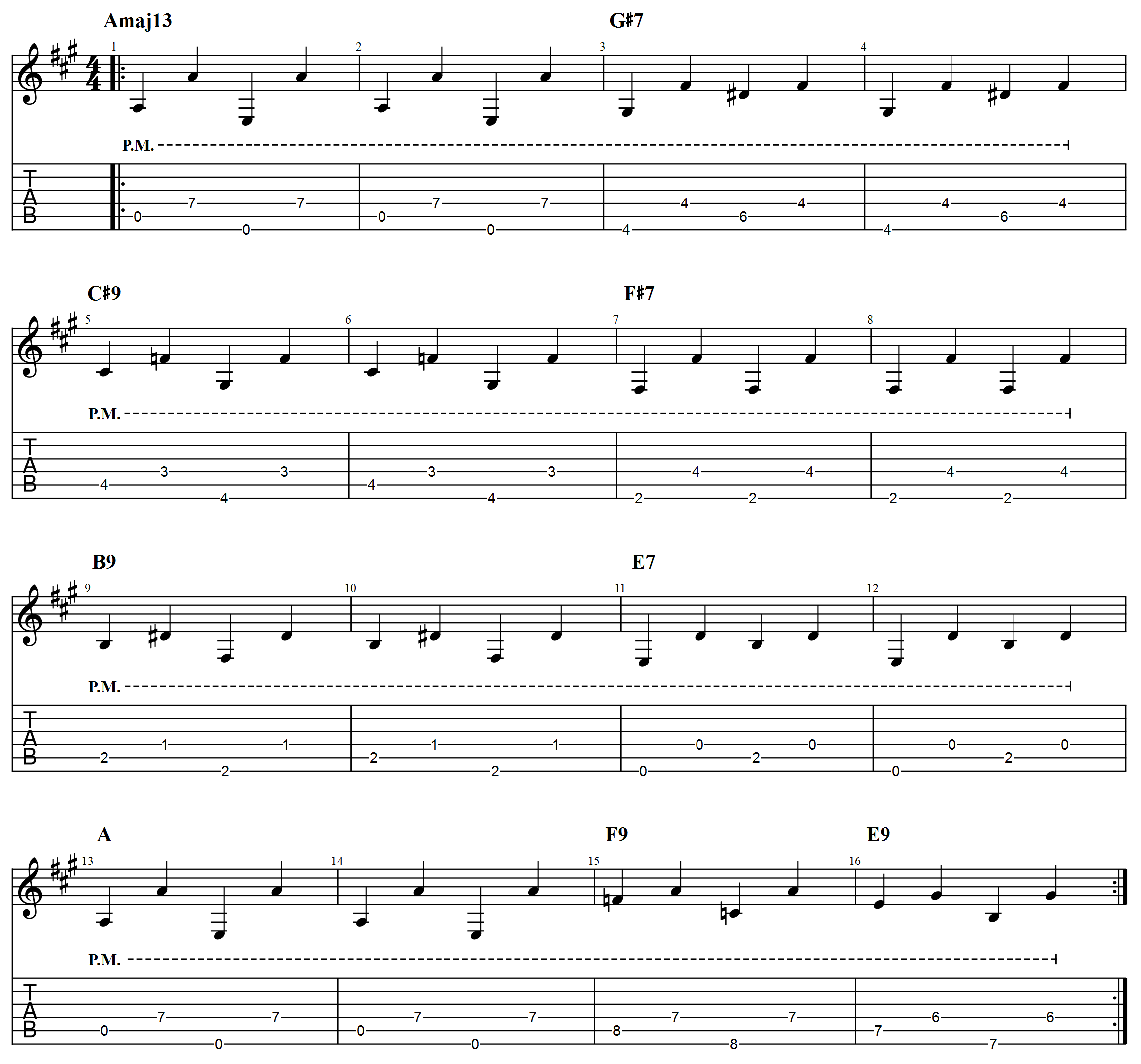 I can’t stress the importance of devloping this technique to a level where it’s completely automated, because as you develop this style to even the highest level, it’s still the same… just done faster, and on more chords. So don’t underestimate it – any time on this technique is time well spent!

In the next lesson, we will dig deep into the melody of Chet Atkins’ Mr Sandman

If you want much more country finger style guitar, check out my new book!

The Bebop Scale: An Introduction
Scroll to top