Start Playing Classical Guitar with the Music of Fernando Sor

If you want to start playing classical guitar, Fernando Sor’s music is one of the most effective ways to start. Often referred to as the Beethoven of Guitar, Fernando Sor wrote a plethora of deep and artful works. His Op. 60 is very interesting, as it was written close to the time of his death. It was also written for beginners. The result was a collection of approachable, yet musically deep etudes. In this lesson, you will learn the first melody from this collection of exercises.

The piece is in A/B form, which means there are two contrasting sections. Each of them are repeated. It opens in the key of C, and borrows from the key of G at the end of the first section. The second section starts on the dominant, giving the player plenty of tension to work into the audience. Each phrase in this melody is four measures wrong. Each section of consists of two phrases, acting in a call and answer fashion.

This melody must be played with all the fingers on both hands, so be sure to pay close attention to the finger markings. By paying close attention to this detail early in the learning process, you will build coordination much faster. Subsequently, it is important to build good practice habits early on. Do not start playing classical guitar without being careful to build a disciplined practice routine.

This lesson has been taken from my new guitar book, The Beginner Classical Guitar Method. It is a book that presents a clear path to mastery using real repertoire from a rich selection of studies. Check it out now from Amazon. 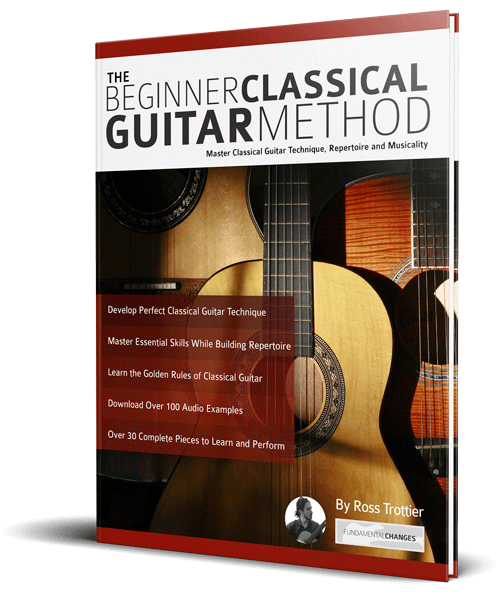