Today I want to examine Funk Voice Leading, an often overlooked element of the chord shapes used in funk and pop rhythm playing. We have previously looked at ideas to help your pop accompaniments in an early lesson but now I wanted to focus on the chord shapes used in this style, and how we can link them together to create the smoothest, most professional sounding parts.

The term ‘chord inversion’ refers to the order of the notes within the chord. So long as a chord contains all the ingredient notes, it can be labelled as that chord, but there are then several options as to which inversion you might choose to use.

To illustrate, in the first bar of this example we have a C major chord, which contains the notes C, E & G. In the first shape the notes are arranged in that order, known as root position, but in the following two examples they are E, G then C, and G, C and E, called first and second inversion respectively. The following bar does the same thing with D minor, and F major.

In funk we usually stick to playing chords on the highest strings, while the bass player provides a strong root note. We are therefore more interested in which note is at the top of the chord than the bottom. The top note of the chord can be called the melody note as it is the most obvious sound the listener hears in the chord. To create the smoothest sound across the chord changes we want to keep this melody note from making unnecessary leaps. The concept of making the chord changes have as little movement as possible can be traced back to classical choral music where each note would be sung by a different section of the choir, hence this practice is called ‘voice leading’. Good voice leading should aim to maintain any notes that two chords have in common, and move other notes by the smallest interval to form the new chord.

To develop your awareness of funk voice leading, we will look at a few choices of common chords and their inversions. In example one, I have played major seventh, dominant seventh and minor seventh chords on the root note of C. Notice that there are four inversions of each chord, one with each of the chord tones as the highest note. It is well worth learning these shapes as they have many applications from funk to blues and jazz. (To learn how they’re formed check out Joseph Alexander’s lesson on ‘drop 2′ voiced jazz chords.) 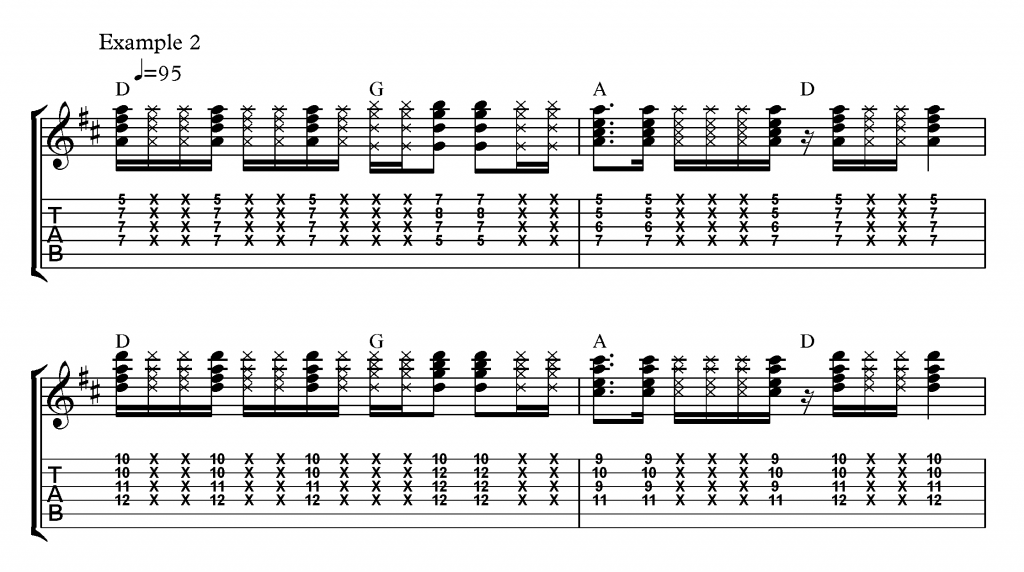 Finally we have a great example of an exercise you can use to practice being able to visualise these chords easily on the neck so they will become part of your usable vocabulary. I take an F major 7 chord followed by a G minor 7 chord at the bottom of the neck and work up to the same voice an octave higher along the string moving from one inversion to the next while alternating between the two chords. It is a great way to practice, and you can apply it to any group of chords that you like.

Recommended listening: Smooth chord accompaniment skills are crucial to any genre but listen to Nile Rodgers for great funk voice leading chord work and from a jazz perspective both Bill Frisell and Allan Holdsworth have very individual and melodic approaches to voice leading between chord shapes.