Now that we’ve discussed reading pitches and rhythms in previous columns, as well as the use of accidentals to illustrate chromatic notes, we’re going to start changing the key signature of the music. So far we have kept within the key of C major (no sharps or flats), but all twelve keys available to us each have their own key signature which can appear at the start of the music.

For example, the key of G major (music built around the tonic centre of G, and the G major scale) contains one sharp, F#, so the key signature would be one sharp written after the treble clef at the beginning of the stave. Similarly, F major includes one flat (Bb) and is thus denoted by a flat on the middle line of the stave.

This means that every time you see an F in the notation, it is automatically played as an F#. Note also that although the key signature’s # is on the F on the top line of the stave, the rule applies to F’s in any octave.

The sequence of the keys is known as the cycle of fourths/fifths. The following figure shows the key signatures of the most common key signatures, laid out in ascending sharps and flats. It’s definitely worth memorising the sharps and flats included in each key. Note how each key adds one accidental to the previous key. 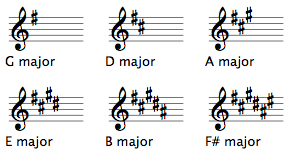 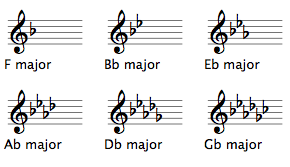 When first approaching a new piece of music, particularly if you are going to be expected to play it there and then, the first things you should quickly scan the page for are the key signature. This defines the fundamental characteristics of the music and provide a framework within which you can more easily decipher the notation.

The most effective way to read in different key signatures is to play from the major scale of that key and so long as you are confident with the scale shape the accidentals should take care of themselves. Then, just as we did in C major, allow for any further accidentals that occur throughout the piece, while continuing to visualise the scale pattern of the given key on the fretboard.

Similar to previous week’s examples, but now we are changing the key. Before playing each example, identify the key signature by name and the notes which are to be altered. You may like to play through the major scale first to familiarise yourself with the fingerings and the sound.

More examples, this time with flats. Look out for the accidentals in the music this time, and remember that in a flat key a ‘natural’ accidental, when applied to a note that is flattened by the key will have the effect of sharpening the pitch.

Recommended Reading: Joseph Alexander has written a brilliant book of reading exercises for Fundamental Changes. There is also a wealth of classical pieces out there, much of which is public domain. Try Handel’s Flute Sonatas or Scalatti’s keyboard music for plenty of scale based single note passages to help practice reading pitches in different keys.